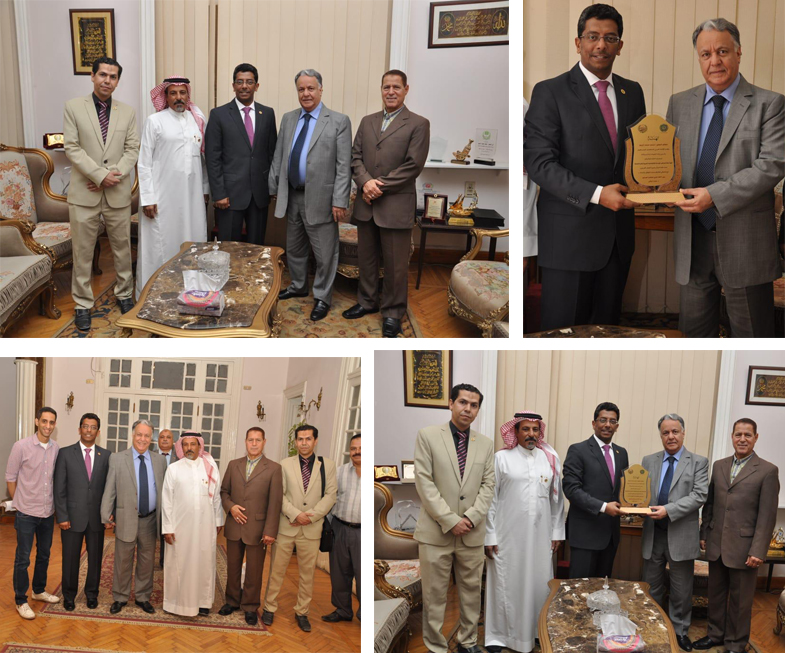 Dr. MAMDOUH ALREFAE exalts the great and big role which Dr. MOHAMMED ALRABE does in Arab joint-work, his wise leadership and his right directions for Arab Economic Unity Council in the previous period. The trust renewal let him complete his great role to serve Arab joint-work and enhance intra-Arab trade and promoting the Arab economy.

Ambassador MOHAMMED ALRABE pointed out that Dr. MAMDOUH ALREFAE is always distinct and excellent at his works. HE also said that it was a great honour to be visited by a delegation headed by Dr. MAMDOUH to bless our trust renewal and I'd thank him for his exerted great efforts in the past period to serve Arab joint work. He is very active, serious and generous with high rank of science. Allah will give him more success and progress in his future life.

On meeting end, HE Dr. ALREFAE submits a memorial trophy to HE Ambassador MOHAMMED ALRABE for his trust renewal to be the general secretary of Arab Economic Unity Council for the second time. The meeting was attended by the Arab Union for customs brokers Dr MAMDOUH EL-REFAE, head of the union, and Mr.Abdullah Altwairji General Assembly Member, and Mr. Samir Abu Nasr the union Secretary General and Mr. Mohamed Sakran the Assistant General Secretary.