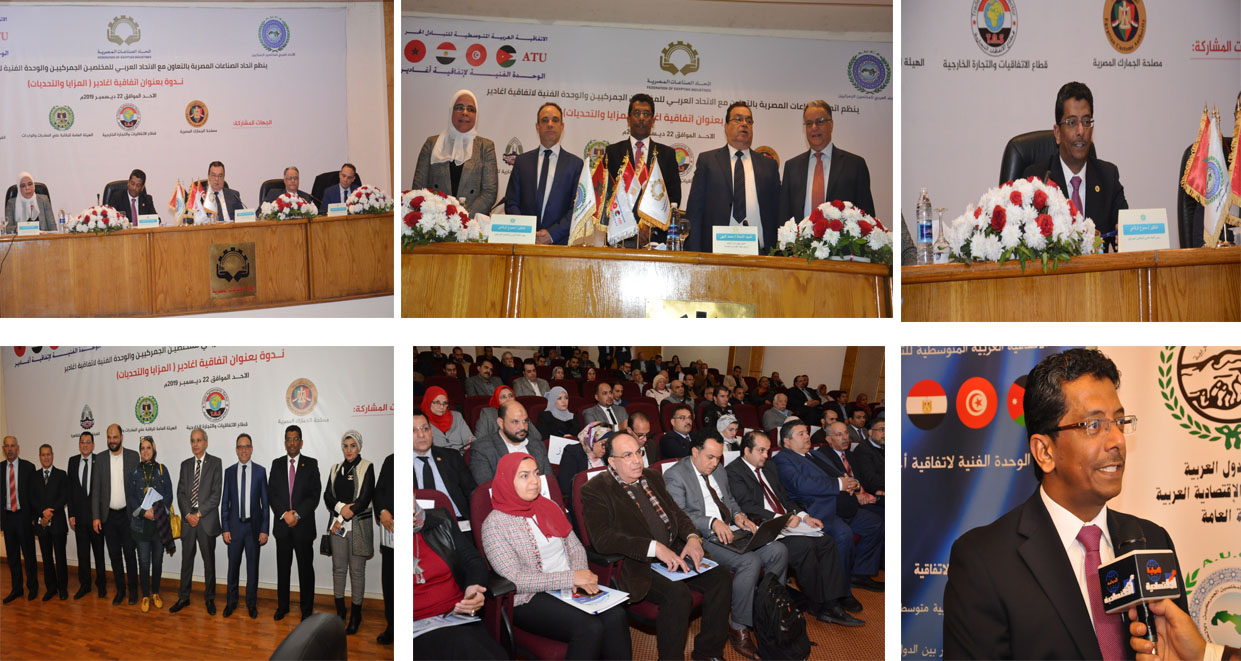 The Arab Union of Customs Brokers, headed by Dr. Mamdouh Al-Rifai, , is organizing a symposium on the free trade exchange agreement between the Arab Mediterranean countries, "the Agadir Agreement ... advantages and challenges." Today, Sunday, December 22, 2019, in cooperation with the Federation of Egyptian Industries and the technical unit of the Agadir Agreement and with the participation of the Egyptian Customs Authority and the General Authority for Export and Import Control and the Agreements and Foreign Trade Sector, in order to get acquainted with the services provided by those entities within Agadir Agreement framework.

Mohamed El-Bahi, head of the Taxes and Customs Committee of the Federation of Industries, opened the events of the symposium, which provides many promising opportunities in the coming period to be utilized by the member states (Egypt - Morocco - Tunisia - Jordan). Moreover, he indicates that this an agreement for free trade exchange between the Arabic countries, where four Arabic Mediterranean countries signed the Declaration of Agadir in 2004 and began the actual implementation of the agreement on the ground in 2007, but there are still many obstacles to implementing the agreement that we seek to overcome by our recommendations depending on the symposiums.

Ambassador Mohamed Al-Rabei, Secretary-General of the Arab Economic Unity Council, valued the efforts of the Federation of Egyptian Industries and the Arab union for customs brokers and the technical unit to Agadir in organizing the events of this symposium, which aims to introduce the goals and benefits of the Agadir Agreement and how to benefit from them in addition to the developments of customs cooperation between the member states of the agreement that serve the economic customer and shedding light on the role of the Agadir Agreement Business Council, and identifying the challenges and obstacles facing the economic establishments.

The Ambassador affirmed that the Arab union of Customs Brokers was able, within a short period of time, to achieve what many Arab unions could not achieve in inter-Arab cooperation.

Dr. Mamdouh Al-Rifai, head of the Arab union of Customs Brokers, pointed out that customs cooperation among member states of the Agadir Agreement is the most prominent in the Arab region, and we commend the effective role played by customs authorities in implementing the Agadir Agreement by facilitating customs procedures and overcoming any obstacles that might hinder the trade exchange efforts.

Dr. Al-Rifai added that this symposium is the beginning of a series of symposiums to introduce the Agadir Agreement and its advantages to the Arab economic customer in the member countries. The Union provides a hand of support and assistance to the Agadir countries in everything they need in order to facilitate the intra-trade movement between the Arab countries.

Dr. Amani Al-Wasal, Head of the Agreements and Foreign Trade Sector, stated that the original agreement includes a kind of strengthening industrial integration and accumulation of origin between the countries and members in Egypt.

Amani Al-Wasal continued that the real goal is to expand the agreement and secure inter-investment and increase the Egyptian commercial growth rates to increase exports to European Union countries.

As for the CEO of the Technical Unit of the Agadir Agreement, Dr. Youssef Tarifa, he thanked the Egyptian Industries Federation and the Arab union of Customs Brokers for their joint cooperation to introduce the advantages of the Agadir Agreement to increase trade exchange and joint investments in a way that contributes to enhancing trade with European nations.

Dr. Tarifa explained that the agreement aims to establish an Arab-Mediterranean free exchange area that currently exceeds 150 million consumers, pushing trade and attracting investment among member states and with the European Union and exploiting the advantages of accumulating Euro-Mediterranean origin in industrial integration, regional economic integration and integration in the Euro-Mediterranean area.

This is in addition to the presentations by the representatives of the authorities participating in the agreement and the advantages of cooperation for the Arab economic establishment that resulted in discussions and positive interaction from the attendees and putting recommendations that need actual implementation.