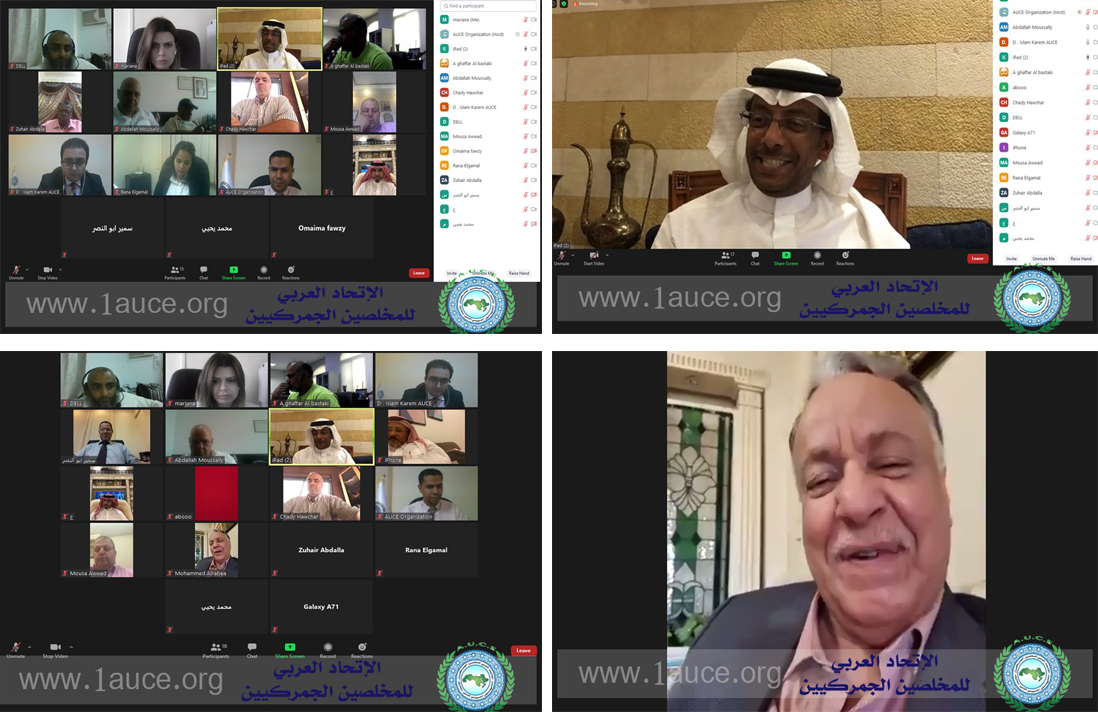 The third general assembly meeting of the Arab Federation of Customs Clearers was held today, July 27, 2020 via the internet in the presence of His Excellency Ambassador Mohamed Mohamed Al Rabie, Secretary General of the Council of Arab Economic Unity.

In the beginning of the meeting Dr. Mamdouh Al-Rifai, President of the Federation welcomed the attendees and the Federation's General Secretariat, for this effort and for the growth, prosperity and Arab economic integration through the organized activities for the benefit of economic dealers and cooperation protocols signed to establish close cooperation relations, and provide technical support to facilitate and increase the movement of inter-trade between the said countries.

Then the Federation’s president consultant presented a review on the federation’s plan and accomplishments during the period 2019-2020 dealing with the activities and events organized by the federation, whether they are meetings, workshops, seminars or training courses, the agreements signed between the federation and Arab,  regional bodies, organizations & relevant authorities, in addition to reports and studies prepared by the Federation, and to clarify the rate of measuring the Federation's performance for the previous period, this is in addition to the presentation of the Federation's work plan for the coming period, which includes organizing activities related to the dissemination of customs awareness through training courses, workshops, forums, seminars and conferences, close cooperation relations by signing cooperation protocols with Arab customs and regional and foreign organizations, providing technical support to Arab countries through preparing studies. The reports are submitted to Arab customs departments, in addition to updating the databases of customers with the federation and creating new databases with the relevant authorities.

Accordingly, Dr. Al-Rifai pointed out that the current crisis - COVID 19 - affected the world and consequently also affected some of the activities that the federation was planning to hold, including the international conference, but the federation did not stop its efforts despite the current crisis as some activities and events were held through the internet (online), and we will continue to work positively until we overcome the crisis.

He pointed out that we, as federations, must work in the coming period to draw up a policy that encourages the business sector to end the period of stagnation, and go towards monitoring crises to deal with them and face them, such as the crisis we are currently experiencing and prepare for any upcoming crises.

He also thanked Dr. Mamdouh Al-Rifai and the Federation for the effort exerted, and for its continuous excellence in exerting effort to achieve its goals in addition to effective and continuous communication.

He also stressed the federation’s strength and importance among Arab customs institutions and the success steps it has taken despite the difficulties it faces and despite the current crisis the world is going through,

During the meeting, some suggestions were deliberated by the members, that the Secretary-General discussed the audience in the possibility to be elected for the next period, and accordingly, confidence was renewed for His Excellency Dr. Mamdouh Al-Rifai for the next period.

At the end of the meeting, Dr. Al-Rifai stressed that our goal is to serve the economic dealer, whether it is a trader, broker, exporter or importer. He paid tribute and thanks to all the attendees. Also, the members gave thanks to the Federation and the Secretariat for their efforts.