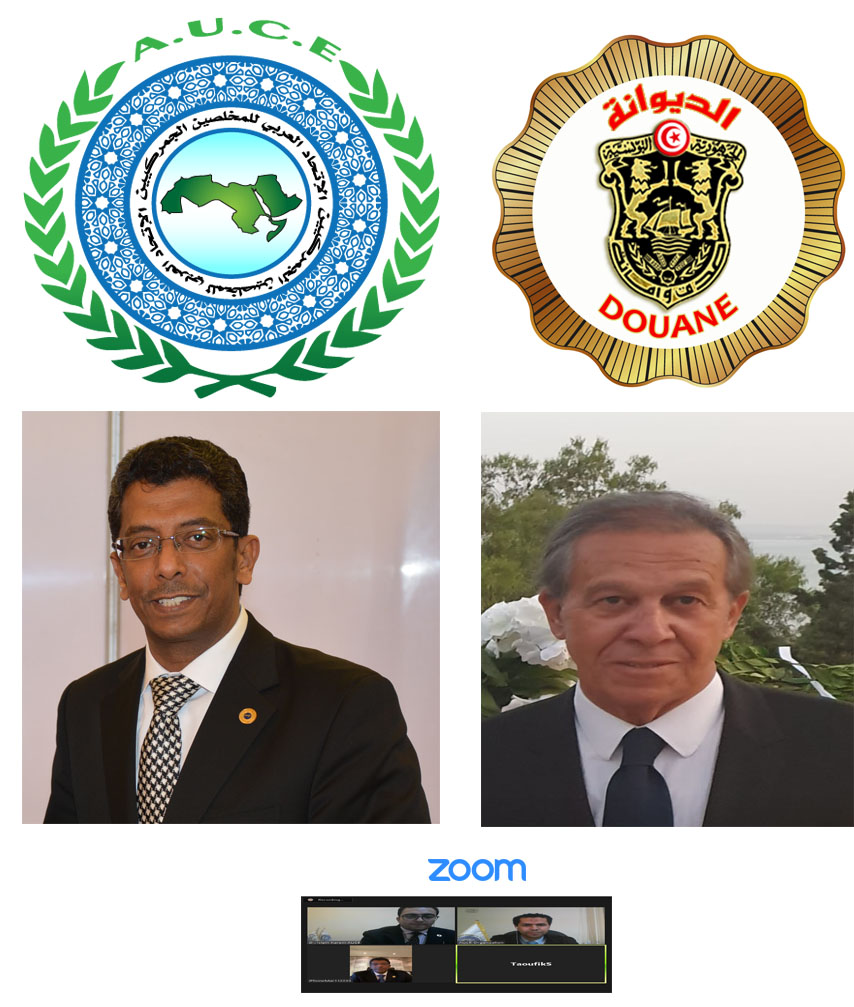 His Excellency Dr. Mamdouh Al-Rifai, President of the Arab Union of Customs Clearers, today held a meeting with His Excellency Mr. Tawfiq Bel Hajj Suleiman, Chairman of the Commission of brokers accepted by the Tunisian Customs, through the Zoom application (online), to discuss ways of joint cooperation between the two parties.

During the meeting, Dr. Mamdouh Al-Rifai reviewed the definition of the Union, its objectives and achievements in the Arab countries by communicating with the relevant authorities, institutions and bodies on how to enhance and develop inter-Arab trade, and provide technical support to economic dealers in the Arab world.

Mr. Tawfiq Belhaj, head of the commission of brokers accepted by the Tunisian customs office, also reviewed the definition of the authority, and explained that it represents the main pillar of the profession of clearance in the Tunisian bureau, in addition, he explained the conditions for individuals eligible for admission as brokers at the Tunisian customs office, including (to be Tunisian, and to pass the professional competency exam), He also stressed that all brokers should be members of the board of brokers accepted by customs.

Al-Rifai, from his part, indicated that cooperation with the Brokers Authority will include exchanging customs consultations for customs brokers, providing training courses, workshops, conferences, seminars and other aspects of joint cooperation aimed at developing and training human cadres, and directed to businessmen and economic dealers (exporters - importers Customs brokers) in Tunisia and the Arab world, as well as participating in the meetings organized by the two parties of cooperation, whether at the local, regional or international levels, in addition to working to combat fraud and administrative and commercial corruption in cooperation with the official authorities.

Mr. Tawfiq welcomed Al-Hajj, on his part, in cooperation with the Union, as it is a target party to serve intermediaries and economic dealers in the Arab world. He also stressed the imperative of constant communication with the Union.

It was agreed In light of the meeting, to send a proposal for a joint cooperation agreement between the two parties, and also to send a technical proposal by the union to hold a set of activities (training courses - conferences - seminars - forums .. etc.), to serve brokers at the Tunisian customs office and serve economic dealers In the Arab world